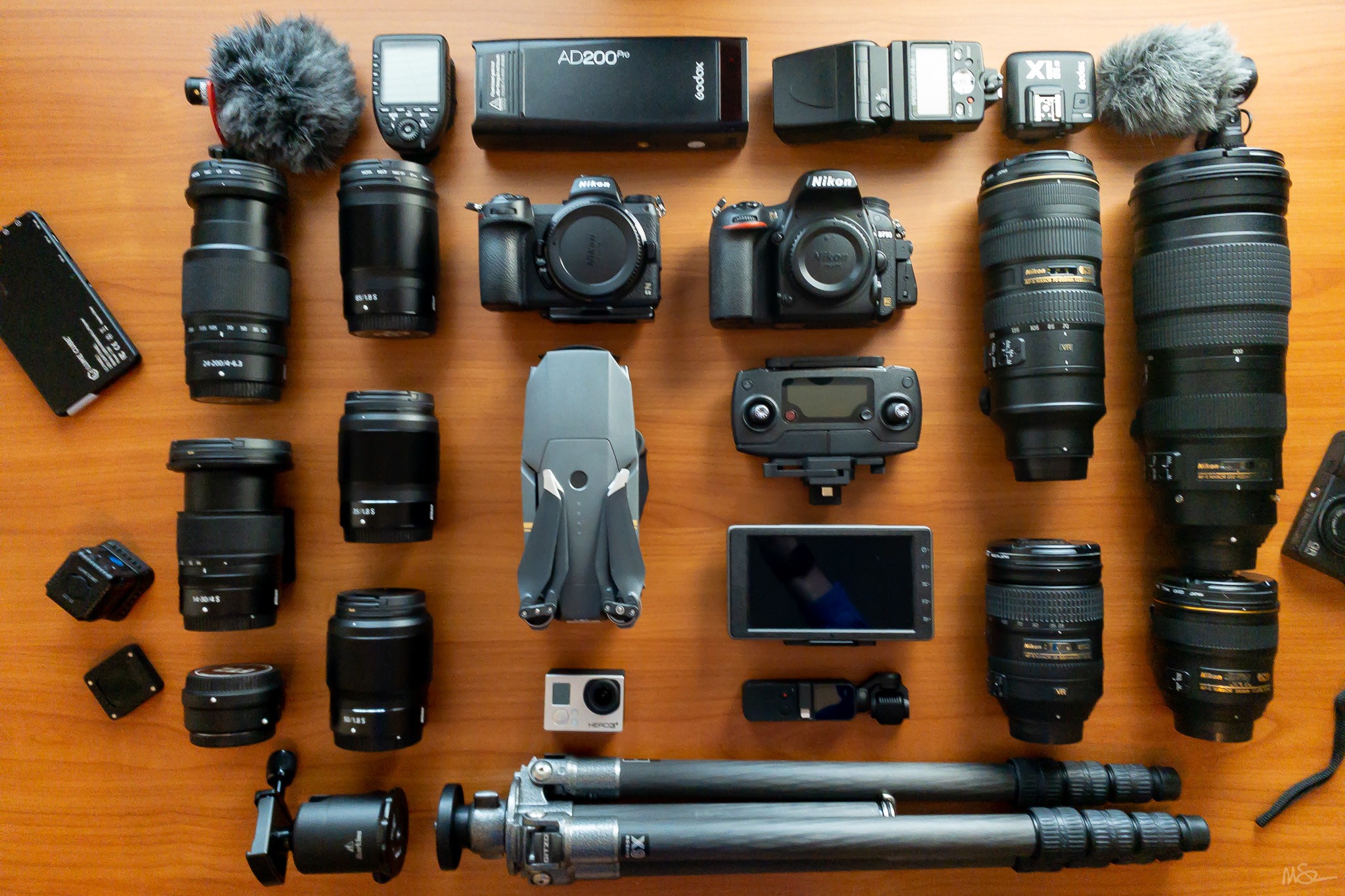 Here is the current set of gear, including mirrorless, DLSR, drone, and flashes – but scroll down to read about my photo equipment background and how I got to this point …

Camera Bags
Like many photographers I am obsessed with camera bags.  You can never have too many!  Here is the current camera bag lineup …

Photo Equipment Background
I’ve had a number of cameras over the years ranging from 35mm still cameras to digital single lens reflex cameras to point and shot cameras to standard and high-definition video cameras. Here is a look at the various still cameras I’ve owned dating back to my high school days.

My first camera was a Canon AE-1 with a 50mm f/1.8 lens – a college graduation gift from my parents after “borrowing” the camera for the three previous years.  The AE-1 was my Dad’s camera and he replaced it with a Canon A-1.  (I still have both cameras.) I shot with the AE-1 and 50mm for 15 years eventually adding a standard zoom lens and a telephoto zoom lens to go along with the 50mm.  The AE-1 was a great starter camera – an excellent way to learn about the exposure triangle and to be efficient when shooting film on a limited college budget. I brought the AE-1 to grad school, family vacations, and some business trips early in my career.

In 1999 I replaced the AE-1 with a Nikon N80 paired with the Nikkor 28-105mm f/3.5-4.5D zoom and the Nikkor 70-300mm f/4-5.6D ED zoom.  I picked up a Lowepro Mini Trekker backpack to carry everything around.  (I still have the N80 and the Lowepro!)  I brought this set of gear to the Indianapolis Motor Speedway for the inaugural United States Grand Prix Formula One race in September of 2000.

After keeping the D7000 as a backup body for a number of years, I traded it in to purchase the Nikon Z6 as part of a transition to mirrorless in March 2019. And then I traded in the Z6 for the Nikon Z6II in December 2020. I took the Z6 to New York, but in the midst of the pandemic the Z6II hasn’t done any traveling yet.

Over the years I’ve also had an assortment of point and shoot cameras, beginning with the brilliant Yashica T4 Super D film camera, purchased in 1999.  I sold the T4 on eBay sixteen years later in 2005 and made most of my money back.  Now it sells for much more. I replaced the T4 with a Canon PowerShot S50.  The S50 always struggled with white balance, wasn’t particularly well constructed, had a terrible menu system for camera settings, and eventually fell apart.  Although by this time I was firmly entrenched as a Nikon DSLR shooter, this experience has kept me for looking at other brands.

In 2007 I bought a Ricoh GR Digital II with 10 megapixel sensor and 28mm fixed lens.  In many ways the GR Digital II was like the T4 – easy to use with outstanding image quality.  I brought the GR Digital II to China and and on the London-Paris trip. I enjoyed traveling with a smaller camera and the challenge of working with a fixed wide angle lens.  The GR Digital II is small enough that I brought it as a second camera to Peru, along with the D750, for use shooting time lapse sequences.

After years of tweaking and simplification, my digital photo workflow, from ingest to Web output, is now built exclusively around Adobe Photoshop Lightroom Classic.  My digital video workflow uses Final Cut Pro for digitization, editing, and output encoding.  In January 2020 I replaced the Mac Pro workstation with internal 4 terabyte RAID with an iMac Pro workstation with 6 terabytes of external SSD storage.

Photo and Video Equipment Timeline
I’m also adding the following timeline showing acquisition dates for photo and video gear dating back 40+ years. The list is subdivided into categories showing 35mm film equipment, video camcorders, DX format, FX format, and the most recent Nikon Z System Mirrorless gear. If I sold something along the way that’s indicated by the dates following the item. Otherwise I still have it.