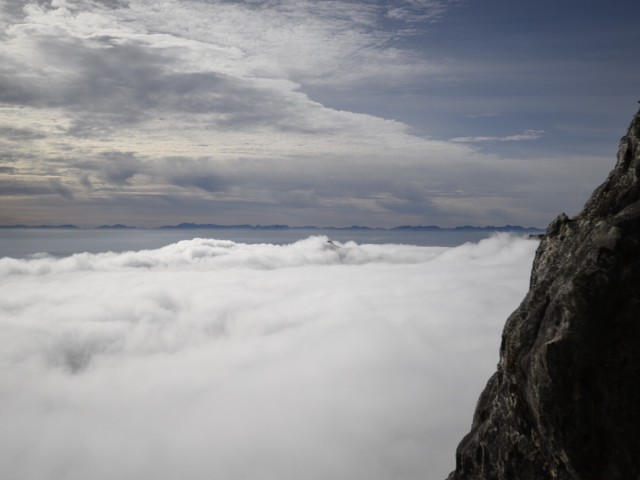 From the Vista Bar & Lounge of the One&Only hotel on the Waterfront:

We began the day with the aerial cable car ride into the clouds to the 1,600 meter peak of Table Mountain and were treated with the spectacular view overlooking Cape Town, Robben Island, and the Atlantic Ocean.

The view from above the clouds on top of Table Mountain

Next it was on to Cape Peninsula for a tour of the Cape Point Ostrich Farm.

A resident of the Cape Point Ostrich Farm

Then we entered Table Mountain National Park and went to the Cape of Good Hope for lunch at Two Oceans Restaurant – and had the Seafood and Meat Antipasti with Warthog and Ostrich.

After lunch we rode the funicular railway to the Cape Point Lighthouse overlooking the Cape of Good Hope.

The Cape of Good Hope

Late in the afternoon we made our final stop on Cape Peninsula to see the African Penguins at Boulders Beach.

An African Penguin at Boulder Beach

After the bus ride back to Cape Town we’re ending the day with sundowners and tapas at the One&Only hotel.