Posted by mliberman on Tuesday, November 17, 2015 · Leave a Comment 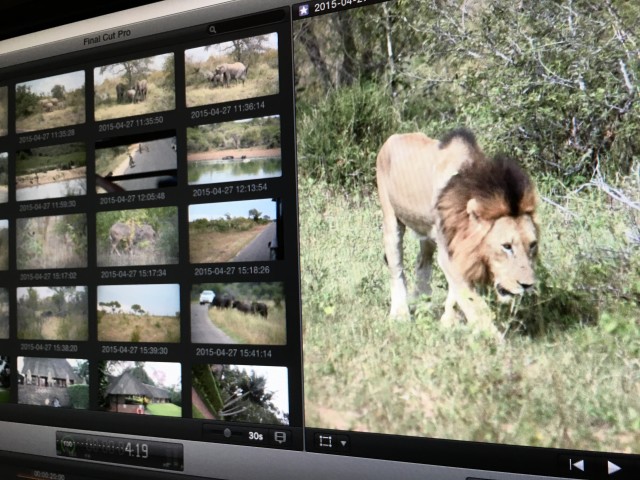 After returning from the Galapagos Islands I did a review of my Galapagos Photo and Video Workflow.  With about six months to go before heading to Peru, I thought it would be a good idea to do the same kind of workflow review for the South Africa trip.

About 10 days into the trip, as the cards filled up, I swapped out the initial set of cards for a second set. At the end of the trip I ended up with 1742 picture files. That’s a shooting rate of 116 per day – more than my average of 100 photos per day on international trips, and a direct result of shooting nearly 350 pictures during each of the two safari days in Kruger Park. In addition to JPEG backups, I used the slot 2 card for movie files and ended up with 394 files totaling 1 hour and 28 minutes, more than the 1 hour and 11 minutes I recorded in the Galapagos Islands.

During the Galapagos Islands trip I used the Eye-Fi SDHC card for slot 2 JPEG backup and movie file storage. I also used the Eye-Fi iPhone app to download pictures from the D600 to use in my daily trip blog updates. Since the D750 includes built-in Wi-Fi, I decided to change that part of the workflow for the South Africa trip.  With the Nikon Wireless Mobile Utility installed on my phone I could connect to the D750, select pictures to transfer to the phone, and then easily incorporate those photos in the daily trip blog updates using the WordPress Mobile App.

My stan­dard work­flow for pho­tos and video is largely the same since the Galapagos Islands trip. I’m still working with Adobe Pho­to­shop Light­room for photo man­age­ment and editing – using the Creative Cloud Photography plan.  The simplified version of the workflow is:

Video files are dig­i­tized using Apple Final Cut Pro X to events named by date and loca­tion.  FCPX takes care of renam­ing files by date and time. On import I don’t transcode to high qual­ity media, instead leav­ing that for later in the edit process. I do review each shot and delete any unneeded or dupli­cate material.

With all trip photo and video files transferred I con­firm onsite and off­site back­ups are com­plete (using CrashPlan to manage both backups) and then refor­mat the SDXC cards for use on the next project. As usual I’m way behind working on the photo gallery and the trip video.  I’ve got some work to do to meet my goal of completing these projects before heading to Peru and beginning the next adventure!