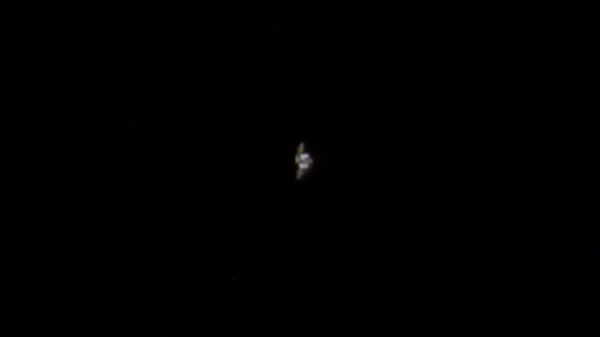 Earlier this week NASA astronauts Doug Hurley and Bob Behnken made history by launching aboard a SpaceX Falcon 9 rocket and docking their Crew Dragon spacecraft with the International Space Station. And Facebook reminded me that it was just about a year ago that I posted an image I took of the ISS. Seems like a good time to share the story of how I made the photo.

For a while I’ve been interested in photographing the International Space Station. It’s large enough that it can be seen overhead with the naked eye and there are plenty of online resources to help identify the location of the ISS as it passes overhead. Making a photograph should be easy, right? Not really!

The space station orbits the earth about every 90 minutes or so, traveling at over 17,000 miles per hour and 250 miles above the surface of the Earth. About 18 orbits each day. It’s easiest to see the ISS when it’s illuminated by the sun and your viewing location is nearly dark. So an hour or two just after sunset or just before dawn. The station can’t be seen every day simply because it’s not passing overhead at the right time of day.

I initially started looking for the ISS in the fall of 2017. NASA’s Spot The Station Web site is an amazing resource for determining sighting opportunities in your area. In addition to when the station is visible, Spot The Station provides information about how long the station will be visible – generally 1 to 4 minutes – its maximum height, where in the sky the ISS will appear, and where it will disappear.

Depending on the timing of orbits relative to daylight, each day may have one or two siding opportunities after sunset or before sunrise. With the information from Spot The Station I went outside on a cloudless fall evening and looked up at the sky. I had no idea what to look for. How bright would the ISS be? How fast would it move across the sky? I gazed up at the stars will beyond when it should have been visible – and I saw nothing. A few days later I tried again. Nothing. And again a few days after that. Nothing. I’m like Yukon Cornelius prospecting for gold in Rudolph the Red-Nosed Reindeer. I lose interest in the project for a while and move on to finishing the Peru video and taking trips to India in 2019 and Vietnam, Cambodia, and Thailand in 2019.

Late in the spring of 2019 I decide to try again. On May 18 I stood on my balcony and scanned the sky looking for a dot streaking across the darkness. And I found it! I had enough time to point the camera in the general direction … to take some really bad pictures of a blurry dot. But I saw the space station!

I tried again on May 20, but it was too cloudy to make a sighting. For the next couple of weeks there weren’t any good sighting opportunities. Either I wasn’t available, the weather was uncooperative, or the ISS wasn’t in a favorable viewing position in the sky.

But on June 3, I was ready. I packed the Nikon Z6, FTZ adapter, and the Nikkor 200-500mm lens. Instead of packing the gear in a camera bag, I attached the lens to the camera and removed the lens caps and lens hood. I wanted to be ready as soon as I got to the location. With the camera on the passenger seat I drove to the parking lot of my nearby office building. The wide open spaces of the parking lot with offered a clear view of the skies overhead. I set up the camera and tripod with a good view of the northern sky, ready for the 9:06 PM pass. I powered up the camera and looked through the viewfinder … and nothing. Black. Quickly I worked to find the source of the problem … but nothing. I went through my mental checklist. Power on? Check. Manual exposure? Check. ISO 3200? Check. Lens wide open at f/5.6? Check. Shutter speed 1/2000? Check. I couldn’t figure this out and now I could see the ISS streaming through the sky overhead.

I resigned myself to the fact that I wasn’t going to get a picture, and instead just enjoyed watching the ISS flying up in space. It was over in a few minutes. Dejected, I packed up the gear and headed home to figure out what I did wrong, or if there was an equipment failure. At home the problem quickly made it self known. I made one of the most basic – and amateurish – mistakes in photography. A mistake so elemental that for a brief moment I considered giving up photography entirely. I left the lens cap on. Let that sink in.

I thought I had taken off the lens cap before heading out to the location. But no, I left it on. Of course I did. The lens cap serves an important function in protecting the lens. Why would I take it off? And on location I had convinced myself that I had left lens cap at home. So much so that I never even bothered to check the front of the lens. I thought I changed my usual working process – but in actuality didn’t – and the result was a missed opportunity. Frustrated by the experience I was determined to get this photograph.

There was another overhead pass the next night, June 4, 2019 at 9:54 PM. A three minute opportunity with a maximum height of 69° above the horizon, appearing 34° above WNW, and disappearing 30° above SE. I was not going to miss this picture. Gear for the shoot was simple – Nikon Z6 mirrorless camera, FTZ lens adapter, Nikkor 200-500mm f/5.6 lens, and Gitzo GT2541 tripod. And while the parking lot at my office building offered wide-open views of the night sky, I thought it might help to get higher up. So I went to the top level of the new parking garage at Fairfax corner.

It was a beautiful late spring evening. Temps in the mid 70s. Mostly clear skies with a few passing clouds. Moderate humidity. And very few insects on top of a concrete parking garage.

I set up the camera and lens on the tripod. This time taking note as I removed the lens cap. I dialed in the same settings I attempted to use the night before – and waited for 9:54 PM. Right on time I spotted the ISS moving through the sky. I was able to focus on the station easily enough using AFC and stayed sharp using back button focus. I fired off 10 quick shots before the station moved away. I did a quick check on a couple of shots and saw I could make out the station and solar arrays. Success!

At home I downloaded the images into Lightroom. A couple of the photos were better than the others so I did some light processing mostly cropping for visibility in the frame and tweaking exposure and contrast. After several years I finally had an image of the International Space Station.

Of course using a telescope it is possible to get higher resolution photos with more detail of the station and the various modules that join together to make the station. And there are complex multi-image transits of the station in front of the sun or moon. But this one is mine.