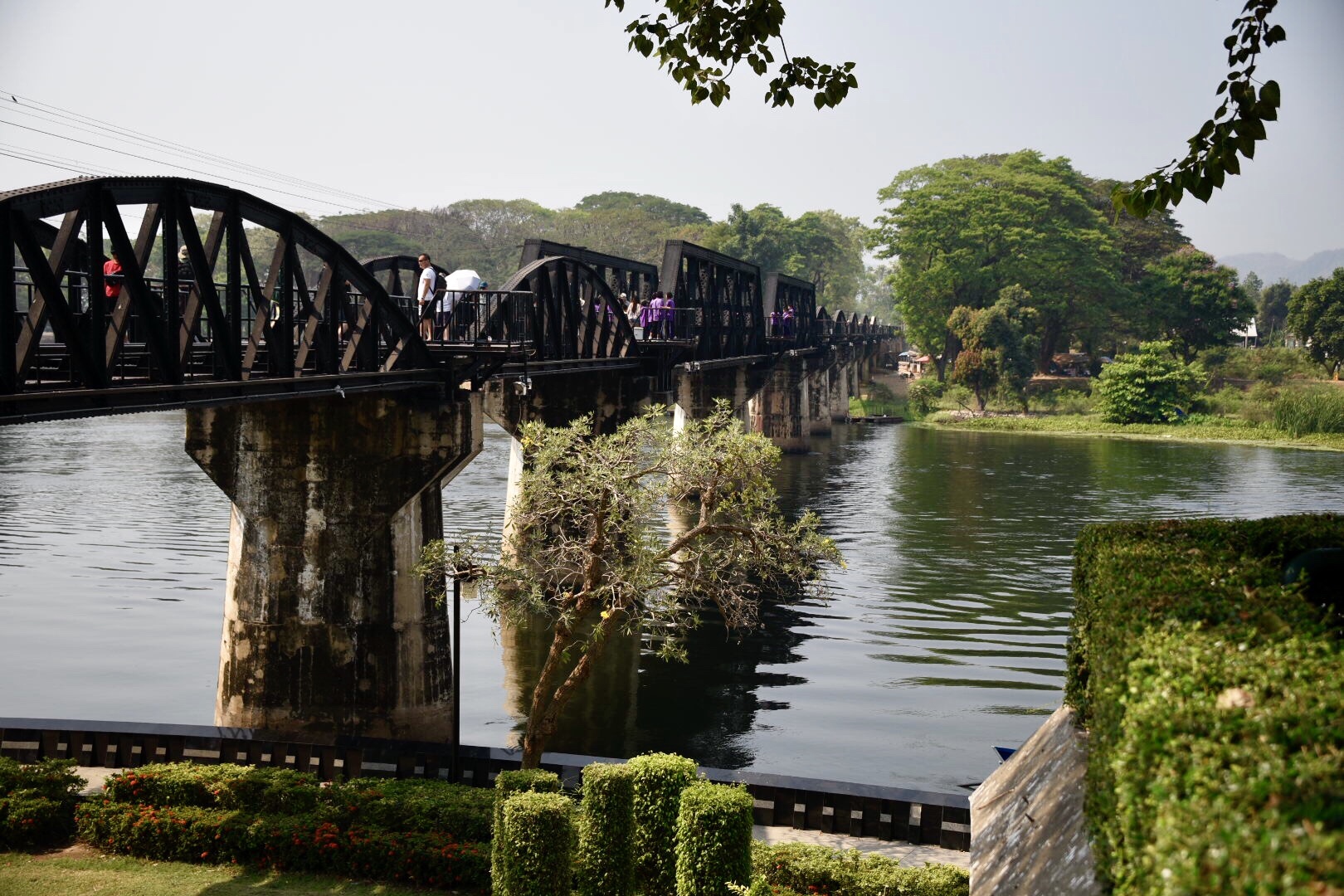 From the Skywalk of the Mahanakhon Tower …

We’re on the bus early this morning with a 6:30a departure to travel from Bangkok to Kanchanaburi. Our run of leisurely 8a departures has come to an end!

We drive about 120 kilometers to the west of Bangkok and reach our destination at 9a. Kanchanaburi is the site of the bridge on the River Kwai where Allied prisoners of war were forced to build a railway bridge by their Japanese captors. The bridge was later destroyed by Allied bombers.

The first stop is a museum dedicated to the history of the construction of the bridge. Our itinerary calls this museum the Thailand-Burma Railway Center but the sign outside the building says Death Railway Museum. The Japanese used 61,000 Allied prisoners of war and over 200,000 Southeast Asian civilian forced laborers to build the 258 mile railway. Of those 12,000 POWs and 90,000 civilians died during construction of the rail line.

Across from the museum is the Kanchanaburi War Cemetery where 7,000 of the prisoners are buried, relocated from jungle grave sites on the southern part of the railroad after the war.

Next we have an opportunity to walk across the now reconstructed River Kwai Bridge. Several minutes later the track is cleared, a train arrives, we board the train, and take the Bridge Over the River Kwai.

An hour later we arrive at Wang Pho and stop for lunch at Praweenut Restaurant where the bus has driven ahead to meet us.

Our last stop of the day is nearby at the Taweechai Elephant Camp, an elephant sanctuary that offers a chance to see these magnificent animals up close.

At 3p we board the bus for the return trip to Bangkok.

Whenever we are on the bus for an extended period of time there is a good AirDrop session that happens among the iPhone users. The Airdrop session is generally silent. Out of the blue Mickey sends a picture and the sharing session begins.

On the first day a seating arrangement develops on the bus and it remains for the entire trip – even as countries and vehicles change. Our Thailand bus sits around 40 passengers in 10 rows separated by an aisle. Since we’re only 20 everyone has a pair of seats to themselves which makes for a convenient place to put your daypack or camera bag. Brad sits in the front nearest the guide and Georgia is in the last row with Ron. I always sit toward the back of the bus. Most people want to be closer to the exit and someone needs to sit farther back, so why not me.

Also, although the roads here are better than in India, they are still bumpy enough that I can get almost a day’s worth of steps just riding in the bus! Today is one of those days.

Tonight is dinner on our own, so Mickey, Donna, Shannon, Peter, Greg, and me go to Little Home Bakery for some Pad Thai.

For an after dinner adventure we head up to the 78th floor Sky Walk at the top of Mahanakhon Tower. The Sky Walk is a glass floor with a view of Bangkok 314.2 meters down! We step out into the floor to take pictures. It’s terrifying and exhilarating!

Tomorrow we head to Hua Hin for a weekend at the beach.